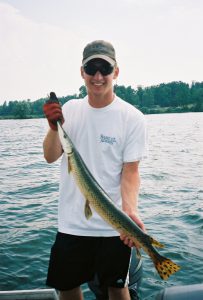 Longnose gar are one of my favorite fish to target on the fly rod.  They are not common in the Finger Lakes per se.  The northern portion of Cayuga Lake has a good population of them.  I’ve seen some in Seneca Lake, but only rarely.  No other Finger Lakes have gar populations.  The Seneca River system, Lake Ontario bays and estuaries, Onondaga Lake and Oneida Lake are where you’ll find them in Central NY.  Lake Champlain and Chautauqua Lake have some beauties and I’ve had the pleasure to fish both of them for gar over the years.

They are a very primitive fish going back millions of years.  I find them in clear water most of the time, usually near drop offs but not always.  They can be very aggressive as well as very dormant depending on the time of year and time of day along with the weather conditions.  They are a great fish to target on the fly-rod.  There is no equivalent to gar fishing in other freshwater fishing but there are a lot of parallels with salt water angling.  That to me is what makes chasing gar so much fun.  I make a point of going after them a few times (if I can) every year.  Large ones (BIG fish in the upper 40s inch range) can be spectacular fighters.  Most of them will jump a few times but they aren’t as powerful as a bowfin (another primitive fish.)   What is cool about them is the whole process of fishing for them and getting a chance to hold and see a living relic up close.

A solid gar from Cross Lake